Shine On – The Making of “And We All Shine On”

The Nashville Engineer Relief Fund and AES Nashville Section Present “Shine On – The Making of And We All Shine On: A Tribute to John Lennon from Music City”

Nashville, TN, August 7, 2020 — The Nashville Engineer Relief Fund (NERF) and AES Nashville Section announce “Shine On – The Making of And We All Shine On: A Tribute to John Lennon from Music City” – a free online event rediscovering the music created for the 2012 NERF fundraiser album helmed by Steve Marcantonio, longtime AES Nashville Section member and audio engineer for John Lennon and countless others. Set to take place on Tuesday, August 11, from 7:00pm – 9:00pm CDT, the Zoom-based event will feature a live-streamed moderated discussion with three of the album’s producers: Marcantonio, Nicole Cochran and Sharon Corbitt, with special guests including long-time Lennon producer-engineer Jack Douglas and artist Bill Lloyd. In addition to delving into the album’s inspiration and production along with tributes to John Lennon’s songwriting, recording and personal legacy, the album will be made available to those who wish to make a donation to NERF as it continues its outreach through these extraordinary times. We invite you to join us as we celebrate the Nashville audio community and examine an exemplary piece of our cultural heritage. The event is sponsored by the Recording Academy Producers and Engineers Wing, in partnership with the AES Nashville Section, and 100% of the proceeds will go to the Nashville Engineer Relief Fund.

And We All Shine On was put together by Marcantonio as a heartfelt tribute to John Lennon, and released originally in 2012 as a benefit tribute with all proceeds going to NERF. The album includes 10 handpicked favorites from Lennon’s solo works, performed by some of Nashville’s finest musicians utilizing several of Nashville’s top studio facilities including Starstruck Studios, Ben’s Studio, Blackbird, Sony Tree Studios, Ocean Way Nashville, and more. All proceeds from Shine On will go to NERF, the beneficiary of the beloved AudioMasters Nashville Benefit Golf Tournament and other community events that provide financial support to the ultimate beneficiaries – Nashville audio engineers and their families in times of need. The event is made possible by support from the Producers and Engineers Wing of The Recording Academy – a perennial supporter of the AudioMasters, the Audio Engineering Society and the AES Nashville Section.

Track listing and artists featured on And We All Shine On include:
Love – Gretchen Peters

Whatever Gets You Through the Night – Jeff Hanna and Matraca Berg

Look at Me – Rosanne Cash

Nobody Loves You – Billy Falcon

Crippled Inside – Foster and Lloyd 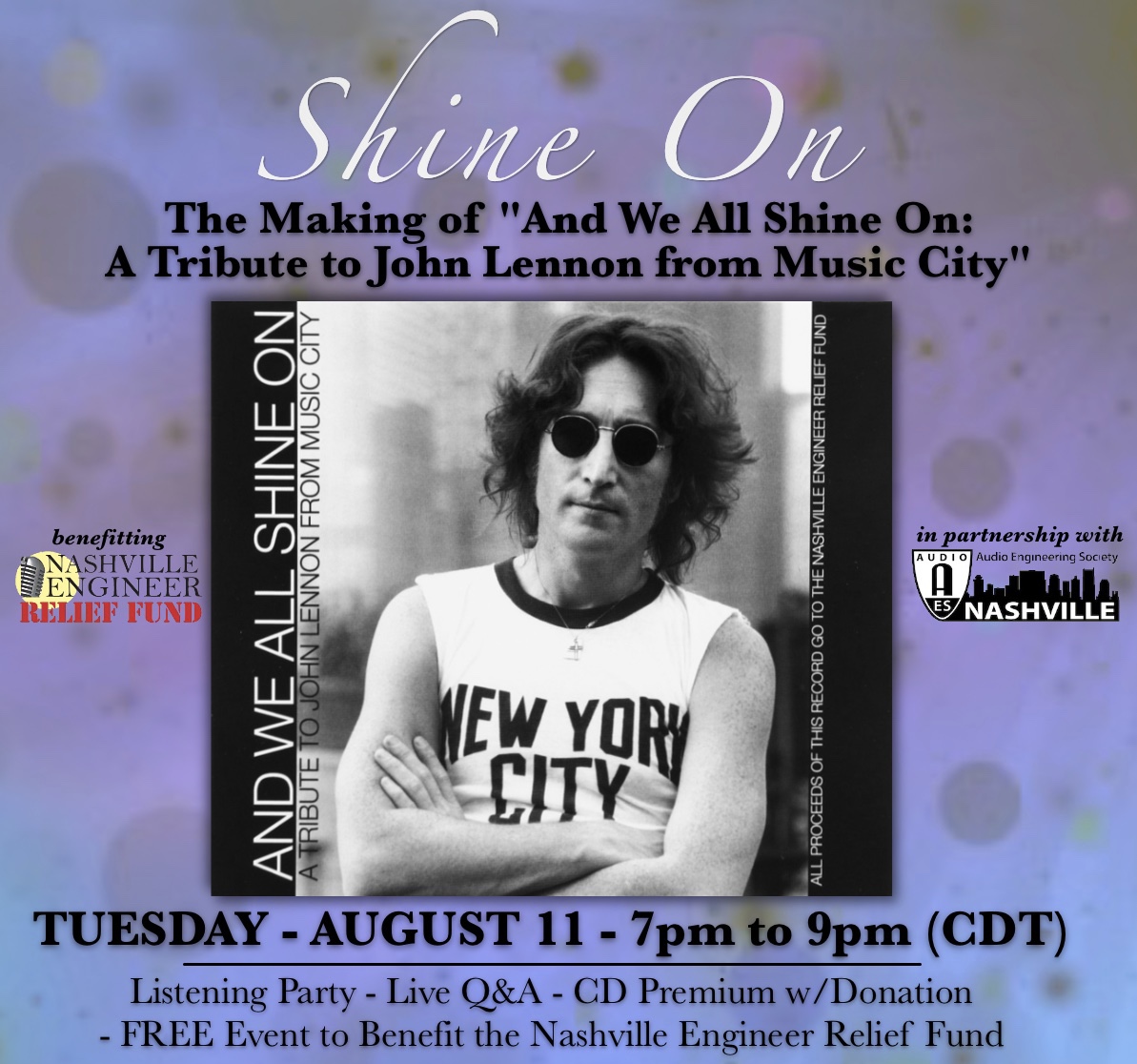 The Nashville Engineer Relief Fund (NERF) and AES Nashville Section present “Shine On – The Making of And We All Shine On: A Tribute to John Lennon from Music City” free online event set for Tuesday, August 11

About the Album And We All Shine On: A Tribute to John Lennon from Music City

And We All Shine On: A Tribute to John Lennon from Music City will be reissued with a virtual kick-off on August 11 at 7:00 pm. The project was produced by Nashvillian Steve Marcantonio, one of Lennon’s engineers, who was working with him at the Record Plant in New York City an hour before he was shot in front of his home in 1980.

Marcantonio hand-picked the artists that appear on And We All Shine On based on their shared love for the slain music icon and his music. They include: Rodney Crowell who sings “Oh My Love”, Foster and Lloyd reunited to brilliantly cover “Crippled Inside,” Jeff Hanna and Matraca Berg sing “Whatever Gets You Through The Night” and songstress Gretchen Peters offers the song ”Love” to the collection of Lennon songs.

And We All Shine On is the only Lennon tribute recorded with Yoko Ono’s consent. John Lennon had a personal affection for audio engineers, so Ono was quick to give Marcantonio her blessing if a promise was made that 100% of the profits benefit the Nashville Engineer Relief Fund (NERF) – a benevolent fund that gives a hand-up to area engineers in times of crisis, which is also very close to Marcantonio’s heart. Like most professions worldwide, sound engineers have been dramatically impacted by the Covid-19 pandemic. Frank Wells, an AES Past President and Secretary of NERF (an independent 501(c)(3) non-profit charitable corporation founded by the Audio Engineering Society Nashville Section) shares, “Our annual fundraiser, the AudioMasters Benefit Golf Tournament, was canceled for 2020 as a result of Covid and this record is one of our greatest assets. We are so grateful to Steve and Yoko for allowing us to release it digitally as we first did in 2011 with the still available CD.” And We All Shine On will be exclusively distributed digitally by TuneCore, with details available soon.

A virtual event featuring Marcantonio, Wells, NERF President (also an AES Past President) Jim Kaiser, executive producers Sharon Corbitt and Nicole Cochran, as well as other surprise guests connected to the project will be online on August 11 at 7:00 pm. Event info, registration and CD ordering info can be found at theaudiomasters.org.

Sadly, current and anticipated restrictions and limitations in player capacities, physical interaction, support staffing and facility usage have made it impossible for the Harpeth Hills Golf Course to host the AudioMasters as we know and love the event in 2020. Consideration of alternative venues and event formats produced no satisfactory options. Sponsorship and player registration payments already received will be applied to the rescheduled event unless otherwise requested.

The Nashville Engineer Relief Fund continues to serve those in the greater Nashville professional audio engineering community as they face times of crisis. NERF will soon announce an online event in development for late July that will give our community an opportunity to interact and provide an avenue for support of NERF.

We appreciate your support of our online event in August and hope to see you on the links next May!

The Nashville Engineer Relief Fund is more relevant than ever. The 23rd Annual AudioMasters WILL happen. In these uncertain times, the debate is when.

The DiGiCo AudioMasters Live and the Westlake Pro AudioMasters were still on the books for May 14 and 15 at Harpeth Hills Golf Course, the course is open under social distancing guidelines, and current Tennessee stay-at-home guidelines are due to expire mid-month. However, we want the AudioMasters to remain the event we all anticipate so eagerly, and not the source of additional stress and uncertainty for all those who participate.

Mindful that travel restrictions and other considerations are varied for many of our participants, and with the safety and health of involved as our utmost concern, the decision has been made to postpone the 2020 AudioMasters Benefit Golf Tournament.

We are in discussions with Harpeth Hills Golf Course and evaluating all of the information we can gather to determine dates in the next few months that offer a high degree of confidence as to their feasibility. We will announce those dates as soon as possible.

Funds already received will be applied to the rescheduled event. We will hold sufficient funds in reserve to fully produce the AudioMasters while continuing to serve the Nashville professional audio community with a hand-up as so many face enormous challenges in this troubled time.

We thank you for your patience and understanding while we all navigate unfamiliar waters together!

Join us for the 23rd Annual AudioMasters Benefit Golf Tournament!

Join us for the 23rd Annual AudioMasters Benefit Golf Tournament to benefit the Nashville Engineer Relief Fund on Thursday May 14 and Friday May 15, 2020.

We are back at the scenic Harpeth Hills Golf Course in Nashville, TN. Day One (Thursday May 14) is our “Live Sound Day” and features our engineering friends in the Live Sound industry. Day Two (Friday May 15) is our “Studio Day” and focuses on our Recording Studio community. Both days will include a 4-person scramble, breakfast, and awards receptions following the golf, along with an abundance of treats and beverages along the way.

Click here to register now, and remember to invite your friends to play!

Thank you for your support of the Nashville Engineer Relief Fund.

“The music industry lost another pioneer this past Sunday. Glenn Snoddy passed away in hospice care. Many of us owe our careers to Glenn who took a chance on so many of us young ‘uns. Glenn went to radio school in the military, later worked at WSM radio and then worked with Owen and Harold Bradley at Bradley’s Recording and Film Studios at the start of Music Row. During his time there he turned an accident in the studio into the Maestro Fuzz Tone pedal that shaped so many songs over the years. Glenn was the recording engineer on Cash’s “Ring of Fire” and he’s also the one who hired Kristofferson to be the custodian and sweep the floors at the studio. He was hired by The Crescent Company to turn the old Woodland Street Theater into one of the largest independent recording studios of its day, Woodland Sound Studios. That’s where many of us got our start in the industry. Glenn turned 96 earlier this month, he was a true Southern Gentleman and we will miss him.”

Visitation and Funeral will be at:

The family has requested that memorial donations be made to the Nashville Engineer Relief Fund by going to http://www.theaudiomasters.org and clicking on the ‘Donate’ link.

The stated goal of this fund is “to allow financial assistance…for individuals in our (engineering) community who, through illness and tragic circumstances, are unable to practice their profession or face other serious problems”.

As many of you know, engineer Butch Carr passed away in April 2014

following an extended illness. Butch was one of those who received assistance from MusiCares and Nashville Engineer Relief Fund (NERF) resources. Normally the recipient’s names are not released except in cases as this one. His wife, Denise, reached out to AES Nashville the other day and wants to announce a benefit concert with proceeds going to MusiCares and NERF. The event will be Wednesday, March 25 at 3rd and Lindsley, hosted by Irlene Mandrell and Vanessa Mandrell and will feature Tracy Lawrence, The Beagles, and other guests. Click here for show details, and to purchase tickets!

We extend a big “Thank You!” to the family for their thoughtfulness in assisting with fund raising for these two foundations. NERF is an organization that was founded by AES Nashville to assist engineers with life crisis events. Please feel free to repost this to other interested parties. See you there!

This entry was posted in Special Events.